Twenty one Wind Synthesisers form the installation “Phantom Field”, creating a swirling buffeting soundscape.  The Wind Synthesisers use an Atari Punk Synthesiser (built and modified by Graham Calvert) and a modified computer fan to transform the slightest breath of wind into a soaring electronic choir controlled and conducted by the wind. During the day of each show the Wind Synthesisers will be adjusted and played by the artist to create swirling harmonics, and gale force sirens.
darkspark.org.uk      powerplant.org.uk

The Arpeggi are wind-driven kinetic sculptures, each fitted with three solar-powered sound oscillators. The form, based on the anemometers commonly found in weather stations, catches wind from any direction and causes the sculptures to revolve, creating shifting sound patterns as they spin at different speeds. Walk between the Arpeggi for the best effect. evolutionaryart.co.uk

Each turn of the feather mechanism triggers a snap shot of an 8 second sound sample, a recording of two birdsongs in decline…A nightingale can deliver as many as 150 notes a second. In Kent, Medway council plan to build 5,000 houses on the UKs largest concentrations of Nightingales. Skylarks: 75% loss in 20 years. Nightingales: 91% loss in 40 years.


Stress and stone by Jony Easterby

Towering, delicate poles bent into arcs by hanging river stones create serene harmonics and percussive flickerings as the wind blows through “Stress and Stone”.  Two ten meter high fibre glass poles are put under tension by long strings hanging from the tip of the poles with rounded river stones attached at the end.  The pitch of the string varies with the weight of the stone. As the wind blows across the strings, harmonics are created and amplified.
www.jonyeasterby.co.uk

Aeolian Harp and Aeolian Percussion by Max Eastley
Max Eastley’s towering structures are a variation on the classic Aeolian Harp, which was an important influence on Romantic writers and connoisseurs. Max’s Aeolian Harp takes the form of a set of bow shaped instruments and his Aeolian Percussion uses stretched latex to form triangular instruments. Both reaching high above the ground to transmit the wind from above our heads, they create a haunting voice for the wind.  Amplification designed by Dave Hunt. The participation of Max Eastley in Audible Forces has been supported by AHRC.
maxeastley.co.uk


Dan Fox’s “Howling Wire” is a twelve metre high electro-acoustic wind harp.  It is made from recycled military and orchestral hardware. Nylon strings are stretched from the top of a pneumatic mast to the timpani drums to create this giant harp.  With weathervane whistlers and elemental sirens, the wind blows through the strings to create its howling sounds.
www.danfox.net


Kathy Hinde’s “Sonic Reed Beds” were inspired by the movement of reeds in the wind. This ensemble of sound sculptures re-imagines the natural reed using steel rods topped with metal or stone. As they move in the breeze, the tops collide creating random compositions of varying densities, from the quiet, gentle collisions of pebbles to overlapping chimes of metal domes. Reed Bed Bases made by Will Datson and Paul Sandimere.


The project Pigeon Whistles takes inspiration from centuries old traditions from both and .  Sometimes called Pigeon Flutes, these small, lightweight whistles are carried upon the tail feathers of pigeons and borne through the air to create a beautiful haunting music. Peter Petravicius, a pigeon fancier for over 40 years, has collaborated closely with Nathaniel to breed and train a kit of Birmingham Rollers. The whistles in this project have been designed using recycled materials by Nathaniel Mann, and are directly inspired by the collection of Chinese pigeon whistles housed at the in .  Our birds will only fly once or twice a day depending on weather conditions. Nathaniel Mann is a Sound and Music Embedded artist in residence with the Pitt Rivers Museum and OCM. Embedded is supported by Esmée Fairbairn Foundation.
nathanielmann.co.uk 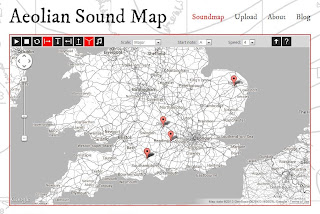 Kathy Hinde also collaborated with Ed Holroyd to create an online soundmap to collate sound recordings that occur as a result of the wind. The map can be played back like a musical score and customised in different ways to generate many different Aeolian soundscapes. Play with the map here – aeoliansoundmap.co.uk. You can upload your own Aeolian recordings using audioboo.
kathyhinde.co.uk